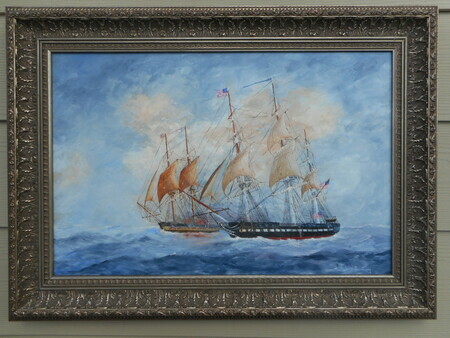 Click on the image to enlarge
$3,000.00
Canadian Dollars
Inquire about this work

Constitution was described as a frigate, but she was designed and built larger than most European frigates. Her armament was heavier and her timbers were thicker to protect her from attacks by Ships of the Line. Guerriere's cannon balls bounced off Constitution's side and Constitution earned the nickname "Old Ironsides". The American officers and crew showed exceptionally good seamanship and Capt. Hull outmanoeuvred his opponent and damaged Guerriere so badly that she could not be taken as a prize and had to be destroyed and sunk. In this painting Guerriere has already lost her mizzen mast which is dragging over the starboard quarter, making it impossible for Capt. Dacres to control his ship, and it will not be long before Guerriere's main mast and foremast come down and she will become the first British ship to be sunk by the US navy.

Constitution is the oldest warship in the world that is still commissioned and still afloat and once a year she sails a short distance in Boston Harbour which is her permanent home. She is open to the public and is the star attraction in the Boston National Historic Park. A whole forest is required for maintenance of her wooden hull.

Note: HMS Victory in Portsmouth, England is older by a few years and is still commissioned but is not afloat.

Oil painting 18in x 24in, by Malcolm Armstrong