SAILING SHIPS. These are ships whose primary source of power is wind in their sails; some may have auxiliary mechanical power.

I will not Abandon You. 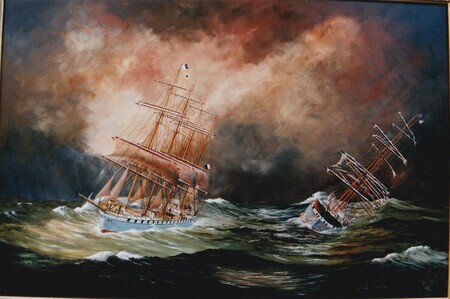 I WILL NOT ABANDON YOU

In October 1913 the British ship DALGONAR was en route from Callao in Peru towards the port of Taltal in Chile. She was in ballast and she ran into extremely bad weather with hurricane force winds which caused her to heel over so much that her ballast shifted. The ballast was wet shingle dredged from the harbour bottom in Callao and it was a particularly difficult ballast to secure. The shingle was stowed in boxes with shifting boards and covered over with timber to contain it; but if this stowage was not completed properly and if the shingle slid free it was impossible to restow at sea. The shingle would slide to the low side of the ship and never return and this would aggravate the list all the more.

In addition to this problem with stowage of ballast there was a racket rampant in Callao whereby shipmasters and shipping companies were swindled. The suppliers of ballast were notorious for supplying less ballast than was paid for. This racket is thought to have had the blessing of local officialdom, it was known to all regular users of the port and to the British Consul in Callao but still it persisted and it may have been the cause of several ships going missing after leaving that port. There must have been a certain amount of complacency when the ship was departing for a comparatively short voyage in good weather. Also the fact that the ballast was wet and probably contained water and sand as well as solid shingle would have made it difficult to check the quantity of good shingle taken on board. For whatever reason, Dalgonar’s ballast shifted and once that had started she was doomed and became unmanageable.

Fortunately for Dalgonar and her crew, her distress rockets were sighted by the French four masted barque LOIRE. By this time, DALGONAR was almost on her beam-ends and was thought to be in danger of sinking. With such a list, the launching of boats was almost impossible, but an attempt was made to launch a boat and in so doing, the captain and three crew members were drowned. No further attempt was made. The Mate took charge and cut the rigging to allow the masts to fall and this to some extent reduced the list.

There was no radio communication between the two ships but LOIRE hoisted the International Code Signal AI which meant “I WILL NOT ABANDON YOU”. The latest International Code book does not include any flag signal for “I Will Not Abandon You”. Many of the flags and their meanings have been changed with successive revisions of the Code. DALGONAR’s flag signal is NC which was then and still is the two flag hoist meaning I AM IN DISTRESS AND REQUIRE ASSISTANCE. The actual flag “C” is now different from the one shown here.

LOIRE stood by DALGONAR for four days until conditions abated sufficiently for a boat to be sent across to take the men off the stricken British ship; this necessitated sailing short boards within sight of DALGONAR. When the seas had gone down somewhat, the actual rescue was a very hazardous operation because of the spars and rigging that were still partially attached to the ship and obstructing the low lee side from which the men had to be taken. There was no further loss of life and all the remaining crew were rescued, but the mate of the LOIRE, who was in charge of the rescue boat and was an elderly man, never recovered from the ordeal and he died on the way home. DALGONAR did not sink; she drifted several thousand miles and went aground on the island of Maupihaa in the Society group. Her remains are probably still there.

The signal I WILL NOT ABANDON YOU really sums up the whole story. It was a wonderful example of fine seamanship and the best traditions of the sea.

This is such a wonderful story that I have painted the same scene several times with variations in colour scheme and slight differences in aspects of the ships.