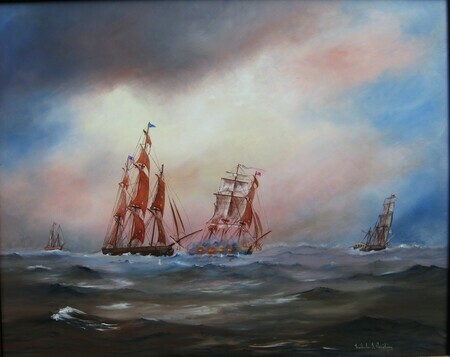 Click on the image to enlarge
$2,000.00
Canadian Dollars
Inquire about this work

In September 1813 during the War of 1812 on Lake Ontario a British squadron of ships led by Commodore Yeo engaged US warships led by Commodore Chauncy. The first ships to exchange fire were Commodore Chauncy’s USS General Pike and Yeo’s HMS Wolfe. Pike lost her fore topmast but inflicted serious damage to the British ship including the shooting away of her main and mizzen topmasts and main yard. The next ship to arrive on the scene was the smaller HMS Royal George, Captain William Howe Mulcaster.

While “Royal George” and “Pike” exchanged broadsides, Commodore Yeo beat a hasty retreat as depicted in this painting. Soon after this the rest of the British fleet followed their Commodore’s example and made off towards Burlington at the western end of the Lake with the assistance of an Easterly gale. The US fleet pursued the British ships but were unable to catch them. This chase was later given the name “Burlington Races”. The schooner at the extreme left of the painting is the Asp, which was towed by General Pike.

Even though the honours were mainly with the Americans in this encounter, it is difficult to understand why Asp and other schooners under tow by larger ships were not released to enable a more serious attempt to overhaul the retreating British ships.