The original oil painting by Joseph Mallord William Turner is 91cm x 122cm. It hangs in The National Gallery in London.

After a distinguished career as a ship of the line in the Royal Navy, including fighting alongside Nelson's flagship "Victory" at Trafalgar, Temeraire was towed up the River Thames to a breaker's yard in September of 1838. This is one of Turner's best known paintings and he himself must have been very fond of it because he would not sell it to anyone. The painting has been reproduced by many publishers in books and web sites. In one book it says "Turner's work cannot be reproduced. Even the best print only serves to awaken one's curiosity about the original". Cosequently one reproduction appears very different from another. I have chosen to try and copy the one I like best. It is some years since I saw the original in The National Gallery, so I cannot be sure how close to the original I have come. More errors crept in when I photographed my own painting; as with Turner's work it is difficult to get a perfect reproduction. The dimensions of my painting are 41 cm x 51 cm (16in x 20in), not quite the same proportions as the original.

I am attracted to this painting by Turner because I am a marine artist and a seaman and because Turner used my favourite colours. If I were painting this event from scratch I would do it differently; I have not painted my own version of the scene nor have I painted my interpretation of Turner; I have tried to copy a particular reproduction of one of Turner's greatest works. Turner did not put much detail in the ships and some of the detail and some of the lighting is a mystery but the overall effect is wonderful and the composition is worth studying. Mixing and matching Turner's colours was a challenge.

An image of the reproduction I used is also on this website in the Sailing Warships gallery. 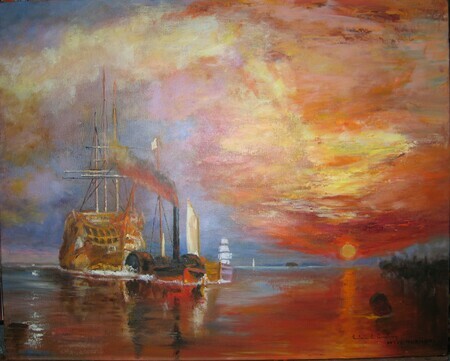 Click on the image to enlarge
$1,500.00
Canadian Dollars
Inquire about this work