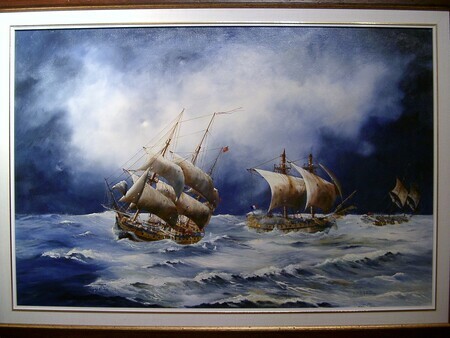 was heading for home after Napoleon’s aborted invasion of Ireland. In addition to her full complement of seamen, there were several hundred French soldiers on board.

decided that the atrocious weather and high seas would limit the effectiveness of the larger ship whose lower deck gun ports would be below the tops of the waves.

INDEFATIGABLE was a 44-gun frigate; she was originally built as a two deck 64-gun ship but one deck had been removed to reduce her weight and improve her manoeuvrability.

The other frigate was AMAZON.

The first shots were exchanged late in the afternoon and a fierce battle raged all through the night. Just before daylight, a gap in the clouds allowed the moon to come out and breakers were seen dead ahead. No one in any of the ships knew exactly where they were; all the ships were badly damaged by gunfire and from stress of weather and all were sluggishly deep from water that had entered through open gun ports. They were in fact embayed on a lee shore in the Bay of Audierne south of Ushant on the French coast and dangerously close to the notorious Penmarsh Rocks.

This painting shows INDEFATIGABLE breaking off the engagement, turning to starboard to avoid going aground. After several hours of fine seamanship by her captain and crew, INDEFATIGABLE safely cleared the land.

AMAZON was so badly damaged, having lost her mizzenmast completely, that she could not be saved and was driven ashore by the gale force winds. Almost all of her crew were able to make it through the surf and became prisoners of war.

DROITS DE L’HOMME was the most badly damaged of all; she only had her fore and main lower sails and a jury rigged headsail, and shortly after the moment depicted here her foremast came down and so she was quite unmanageable. She went ashore and was lost with hundreds of seamen and soldiers.