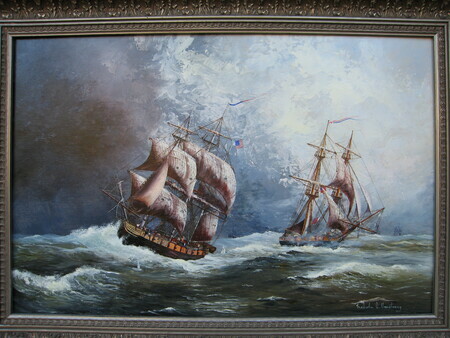 The British brig FROLIC was the sole escort for a homeward bound convoy when the American sloop of war WASP came in sight.

The ensuing battle between these two warships was fought in a North Atlantic gale. FROLIC was already in a bad way, having lost the use of her main yard in the gale. The wind was too strong for topgallants so she was unable to set any square sails on her main mast. However, in most respects the two ships were evenly matched and neither ship was trying to avoid the encounter. WASP reduced sail as soon as she was in range.

This painting depicts an early stage of the action before either vessel had suffered serious damage.

Soon after this, FROLIC shot away WASP’s main topmast and mizzen topgallant mast. In calmer conditions, this damage might have proved decisive but in spite of this dismasting, the battle continued. The American gunnery was directed at the hull and deck of FROLIC and it proved to be more accurate and effective than the British fire. Finally with both ships almost out of control in the gale they came together and the American boarded FROLIC by which time the British crew was so depleted that they could put up no resistance.

Meanwhile the convoy escaped and a few hours later the tables were turned by the arrival of a large British warship, which was more than WASP could handle. So WASP was captured and FROLIC was recaptured. So much for the fortunes and futility of war.