STEAMSHIPS. This includes any ships powered primarily by steam or diesel. 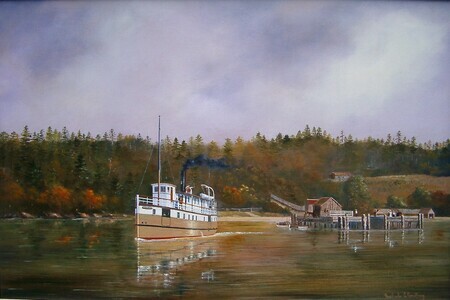 Click on the image to enlarge
$2,500.00
Canadian Dollars
Inquire about this work

The steamer IROQUOIS is shown leaving the dock at Bedwell Harbour, the current site of Poets Cove resort. IROQUOIS was a regular caller at Bedwell Harbour and from there would proceed to Hope Bay on the east side of North Pender Island and return to Sidney BC. The canal between the two Penders was dredged so that the Iroquois could pass through and not have to make the longer trip in exposed water around the southern tip of South Pender.

IROQUOIS was built in 1900 and was lost at sea off Sidney in 1911. After her loss, service to Pender Island was taken over by various ships of the CPR.