STEAMSHIPS. This includes any ships powered primarily by steam or diesel.

S.S. Empress of Canada. Please scroll down for information. 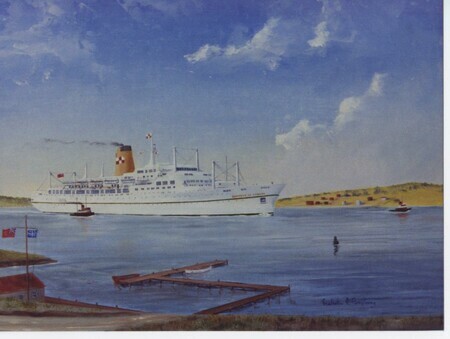 This was the third Empress of Canada. She was on the trans-Atlantic run in the late 1960s and early 1970s. Modern looking compared with the early CPR Empress ships, but still more beautiful that many of today's huge passenger ships. This was a commission from a friend who had sailed in her as a passenger. She is shown in the St Lawrence River. It is included here for sentimental reasons.

The first Empress of Canada was a fine looking three funnel ship which was the ultimate in luxury in the era between the wars.

The second Empress of Canada came to grief as the result of a fire in Liverpool in 1953; I was an eye witness to this sad event as I was on a ship at the next berth at the time.